Finalists for the Shropshire star excellence in Business awards

It is with great pride that we write this post after being shortlisted for the Shropshire Star Excellence in Business Awards.

The annual awards have several categories and are judged by industry experts. Boxall & Edmiston are finalists the innovation category, which is awarding our work on both the gun builder web tool and our use of technology to advance . The second award we are finalists for is manufacturing excellence, which focusses on our use of Computer Aided Design (CAD) and Computer Numerically Controlled (CNC) when producing our range of products, as well as the use of a laser for engraving.

The awards take place on the 23rd April and the Boxall & Edmiston team will be in attendance with baited breath.

These will not be the first awards Boxall & Edmiston have been involved with. In 2013, we were "Highly Commended" in the Best New Gun category at the Shooting Industry Awards for the 12 bore round action over and under. The following year we won "Best New Gun over £15,000" at the same awards, this time with the square 12 bore over and under. We have entered two categories at the Shooting industry awards 2015 and will add any information on those as we receive it. 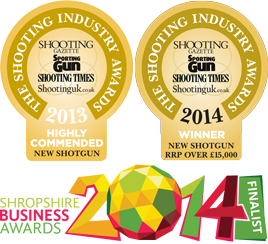 Alongside the Shooting Industry we were also finalists in the Shropshire Chamber of Commerce Business awards for 2014, an accolade we hope to win this year.

The awards received are in many ways a result of the excellent team of people brought together at Boxall & Edmiston, as well as the numerous out workers whose talents we call on regularly. Every member of staff has great pride in their work and we feel that our passion is evident in the products produced. 2015 is already proving to be our most successful year to date, with a rise in sales and production, as well as new guns due for release throughout the year.

With this focus we have found that people who understand guns really value what we do and understand that they are not only buying a quality product that will last several but are also doing their bit in supporting the British gun trade.

Later in the year we will be delivering our 100th gun, which is no small accomplishment as many thousands of machine and man hours go into producing them. At Boxall & we have started strong and keep getting stronger and are grateful for the support received from our clients, the shooting media and British gun trade.