From the Gun makers

A Boxlock or a Sidelock are types of gun with certain features, this article looks at these features in terms of Side by Side shotguns. The names Boxlock and Sidelock are like most gun terminology, they are exactly as the name suggests. To explain the difference between the two the "Lock" of a gun must first be considered.

The Lock or Lockwork is the mechanism that allows the gun to transfer the trigger pull to the detonation of the cartridge. In basic shotgun terms this is the pull of the trigger, which releases the guns sear allowing the spring to drive the hammer through the striker hole, thus detonating the cartridge.

Consider the name of each gun. A Boxlock is entirely that, the Lockwork sits inside the "Box" of the action and is synonymous with durability. Below is a Computer Aided Design (CAD) image of the inside of a Boxlock and an actual Boxlock, in this case a Sideplated Boxlock. 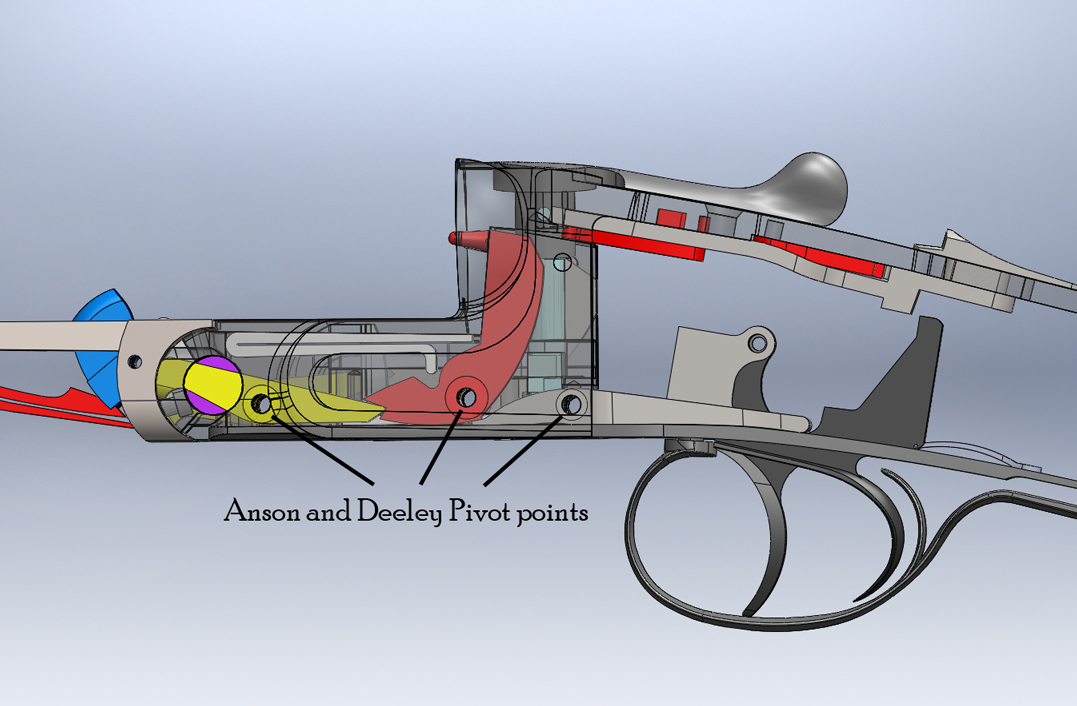 The Boxlock shown is based on the Anson and Deeley design (Circa. 1875) which has become the building blocks (if not the foundations and first several floors) of all Boxlocks. The Anson and Deeley design is the positioning (cantilevering) of the pivoting mechanisms on the gun. These control the components interaction in terms of releasing and setting at the appropriate point to perform various tasks. Put simply, these are the optimum points at which the Sears, Hammers and Cocking Limbs work together for the gun to function properly, much as they have done for over 100 years.

A Sidelock also has an explanatory name as the Lockwork sits on the Side of the action as shown below. With 55 main parts (in the Boxall and Edmiston Sidelock) and many more pins and screws, a Sidelock is an unquestionably complicated gun to manufacture and assemble. 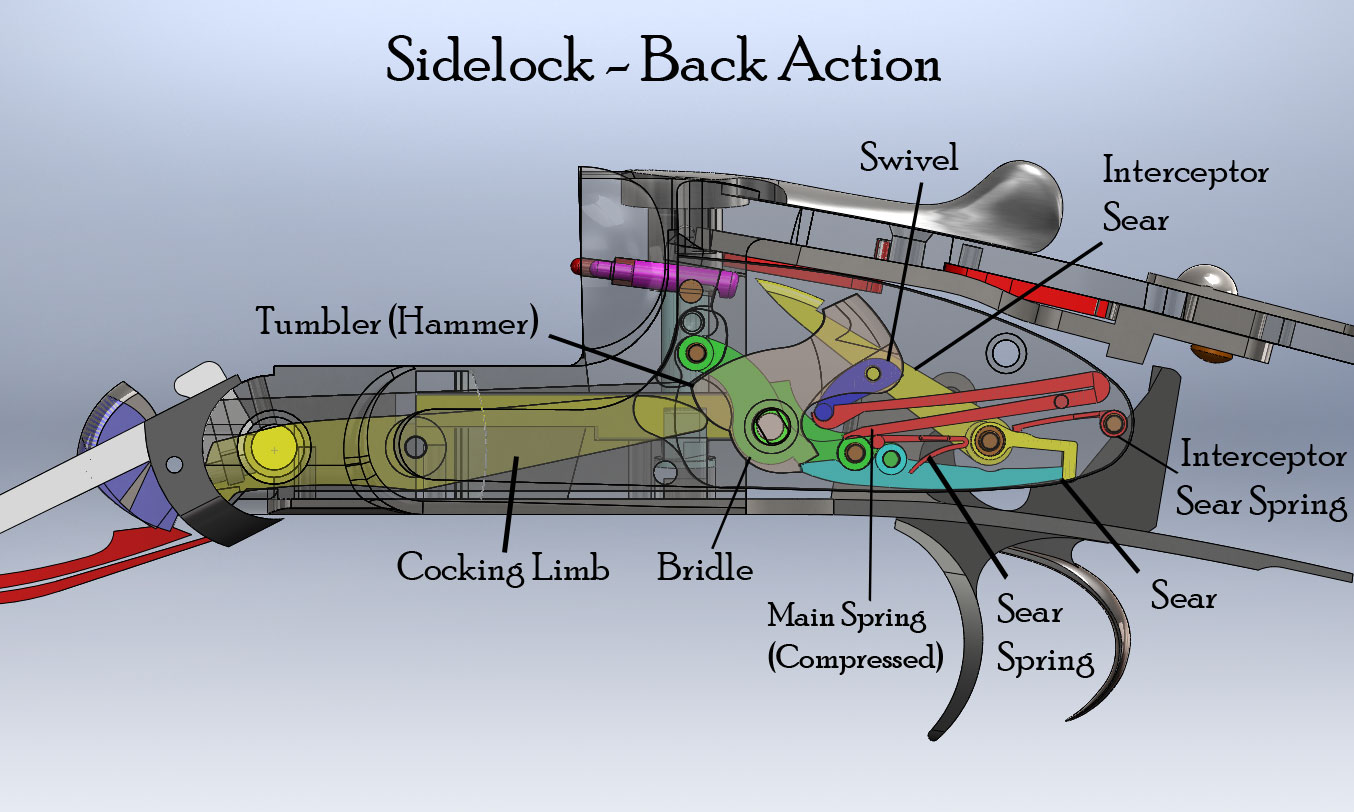 The Lockwork inherited its name from the clock makers who were originally hired to build guns as they were of a similar complexity to the lock mechanism in a clock. Some of the terminology used by clock makers still remains for example Tumbler, Sear and Bridle.

A gun lock is notoriously difficult to assemble with only a handful of craftsman in the UK still working as professional "lock makers". The difficulties stem from assembling a complex mechanism with three springs applying forces throughout the lock. The picture of the Sidelock Lockwork hopefully demonstrates this as each component is layered with precisely timed and calibrated interactions.

To compare the two designs in terms of merit is difficult as both have benefits. The Boxlock is simpler in its design and build with fewer components to go wrong. The Sidelock has more solid steel across the action as the Locks are further back which offers additional strength.

The geometry of a Sidelock generally gives a crisper trigger pull and the mechanism normally houses an interceptor sear which is a safety device in the event of a component malfunction or the gun receiving a severe blow for example being dropped (both of which are extremely rare).

Irrespective of being a Sidelock or Boxlock the Hammer (or tumbler) axis is in line with the striker and therefore the energy of the "blow" is transferred most effectively to the cartridge. However, if we apply this logic to an Over and Under shotgun, which have striker holes along the centre of the action, then a Sidelock mechanism becomes less efficient. This is due to the Tumblers being positioned on the Sideplates of the Action where they, as well as the striker holes, must be at an angle to supply enough force to detonate the cartridge.

Boxlocks and Sidelocks are British gun masterpieces and it is a great comfort to know that the fundamentals of these tried and tested designs remain in truly British shotguns.

"The Boxlock has a more compact action where the major works are contained "literally in the box of the action". Invented by Anson and Deeley of Westley Richards it was further developed by Greener and has been much copied since its introduction in the 1870's when it was the first really successful hammerless design.

The hammerless Sidelock and in this case perfected by Fredrick Beasley whose designs were later bought by Purdey and developed by Holland and Holland, puts a bit more weight between the hands and has the advantage that no compromises need be made with issues such as sear angles and this, when well made, not only offers better dynamics but improved trigger pulls not to mention more space for the engraver to apply his art."