This article looks at gun terminology, specifically those elements with numerous names. Gun terminology is such a broad topic that when coupled with the colloquialisms and their company/regional histories it can be a little tricky to navigate, hopefully this quick overview will help.

At Boxall and Edmiston we have gunmakers from all over the UK (and South Africa). Some were classically trained at Holland and Holland or other well known names, others are self taught with more years of experience than they like to admit and some are being trained here as we take on apprentices. Their training has given each member of staff a diction and it can be quite entertaining to listen for translations between gunmakers benches.

Below are just a few examples of the varying names and their definitions, some of the information is taken from Lewis Potter's book "The art of Gunsmithing" - a worthy read written by one of the UK's finest gunsmiths:

Ball fences/Detonation - refers to the section around the top of the action body, the names originate from pin fire guns, Purdeys have been known to call this section the 'Detonation' as originally it would have housed the powder primed for detonation.

Barrel face/Breech face/Breech end - these terms are all used to describe the end of the barrels that sit on the face of the action body.

Bent/Hammer notch - This is the position the gun sits when primed, the hammers (or tumblers) are held in place by the sears with the spring primed. 'Bent' or 'in Bent' is a Birmingham term whilst 'Hammer notch' tends to be the favoured definition in London.

Bob weight/Inertia block - the component that re-primes an over and under to fire the next barrel. The 'Bob weight' is more of a London term. 'Inertia block' stems from its use of recoil to activate the system and the term seems to have come across from European gunmakers.

Cam/Toe - on a side by side this component protrudes from the knuckle of the action and primes the extractors if a cartridge has been fired. 'Cam' is predominantly used in Birmingham whilst 'Toe' is used in London.

Draw/Circle - this is the curved face of the barrel lumps (protruding section under the barrels) with the centre of the arc (circle) centred just above the hinge pin to create a cam action that pulls the barrels onto the action - 'draws them together'.

Extractor bed/Extractor way - the recessed section of the barrel face for the extractor heads to sit within, ready to expel a cartridge.

Forcing cone/lead in - this is the tapered area inside the barrel formation immediately in front of the chamber, which guides the shot into the chamber.

Hammer/tumbler - the component that hits the striker or firing pin to detonate the cartridge.

Hinge pins/Trunnions - the pivot location in the front of the action body for the barrels to hook into on some over and under shotguns. The term Trunnions comes from the Trunnions on a cannon, the pivot points that a cannon sits upon.

Interceptor sears/choker - a safety component on a Sidelock known commonly as an interceptor sear but Boss refer to it as a choker.

Main spring/hammer spring - a large vee or leaf spring that operates the hammer. In Birmingham it is usually the mainspring and in London, the hammer spring.

Safety/Safety catch/Safety thumb-piece/safety button - All terms to describe the safety operating device for a gun.

One of the most interesting terms is 'Spring' or 'Bounce', a term that Vic Venters (famous American journalist) consulted us on for a study. The terms, in our opinion, refer to the gap between the barrel and action flats before the gun is sent for proofing. When at the proof house the forces used to test the guns safety are such that the gun 'beds in' and some movement occurs, the 'spring' or 'bounce' is the space left to compensate for this movement before the gun is brought 'back to the face'.

When studying this term Vic approached the majority of the UK's gunmakers and was amazed to get quite differing responses regarding the definition of these terms. It also became evident that London trained gunmakers refer to it as 'Spring' with Birmingham using 'Bounce'. 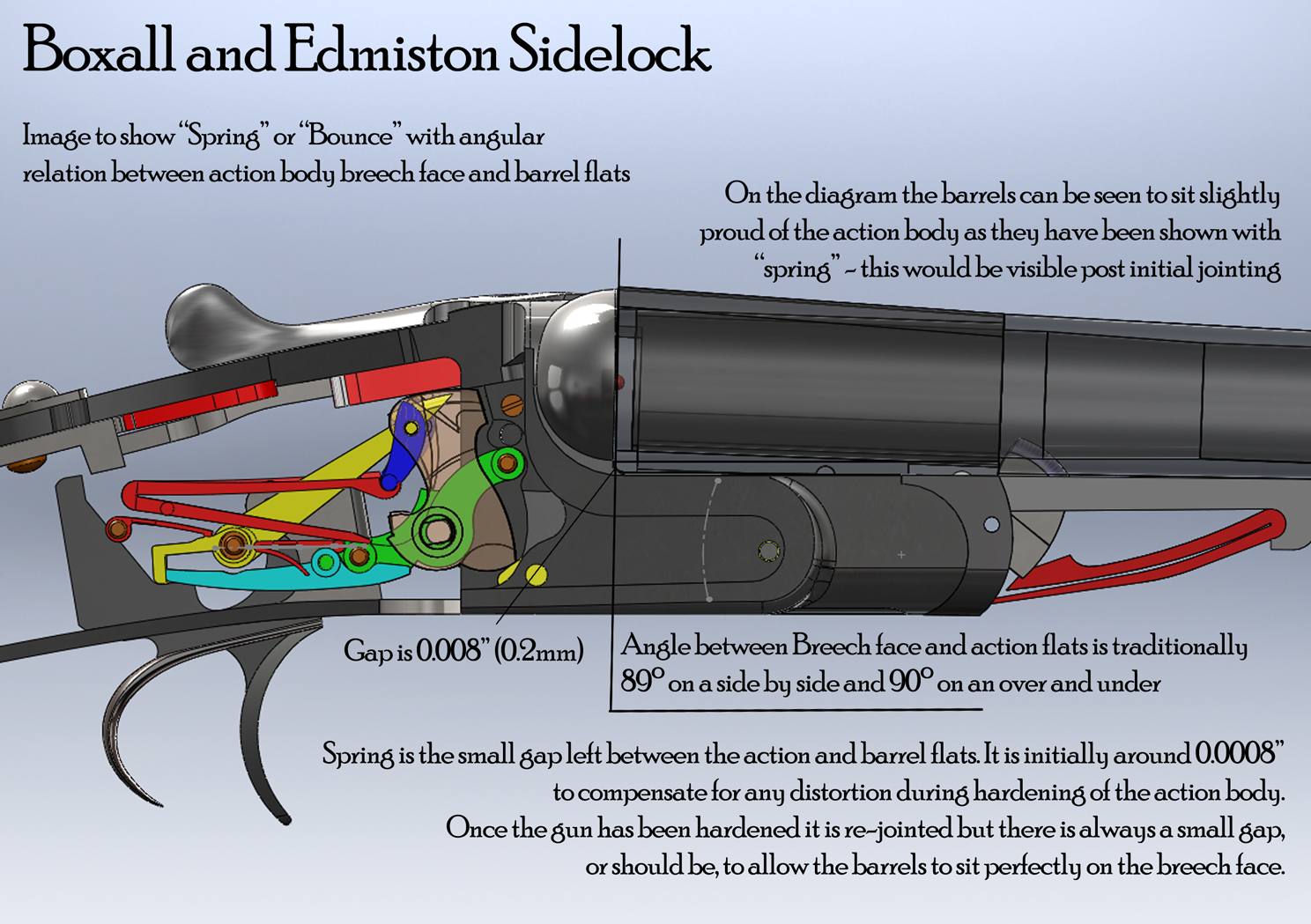